Getting started with the Combine framework in Swift

Combine was introduced as a new framework by Apple at WWDC 2019. The framework provides a declarative Swift API for processing values over time and can be seen as a 1st party alternative to popular frameworks like RxSwift and ReactiveSwift.

If you’ve been trying out SwiftUI, you’ve likely been using Combine quite a lot already. Types like ObservableObject and Property Wrappers like @Published all use Combine under the hood. It’s a powerful framework to dynamically respond to value changes over time.

You can compare the Combine framework to frameworks like RxSwift and ReactiveSwift (formally known as ReactiveCocoa). It allows you to write functional reactive code by providing a declarative Swift API. Functional Reactive Programming (FRP) languages allow you to process values over time. Examples of these kinds of values include network responses, user interface events, and other types of asynchronous data.

In other words, a FRP sequence could be described as follows:

The basic principles of Combine

The basic principles of Combine make you understand how it works and how you can use it. Before we dive straight into the code examples, it’s better to start with some background information. This will help you to understand better how the code works and behaves.

The Combine framework comes with so-called Publishers and subscribers. If you’re familiar with RxSwift:

Different namings, but they both give the same understanding. A Publisher exposes values that can change on which a subscriber subscribes to receive all those updates. Keep this in mind while we go over some Publishers’ examples in the Foundation framework while working with Combine.

The Foundation framework and Combine

The Foundation framework contains a lot of extensions to work with Combine. It allows you to use Publishers from common types you’re already familiar with. Examples include:

Taking the last example, we can explain the concept of a Publisher and a Subscriber.

In the following code example, we create a new Publisher for our new blog post notification.

This publisher will listen for incoming notifications for the newBlogPost notification name. However, this will only happen as soon as there is a subscriber.

We could, for example, create a lastPostTitleLabel which subscribes to the publisher.

The label is now a “Subscriber” to the notification “Publisher” and waits for new values to process. Trying out this code you might already notice that this doesn’t work yet. It results in the following error:

The text property of the label requires receiving a String? value while the stream publishes a Notification. Therefore, we need to use an operator you might be familiar with already: map. Using this operator, we can change the output value from a Notification to the required String? type.

This will result in the following complete code example:

Whenever a new blog post is “Published”, the label “Subscriber” will update its text value. Great!

Just before we dive into the rules of subscriptions, I’d like to point out that the above code example is creating a Subscriber directly. Combine comes with a lot of convenient APIs which allows you to “Subscribe” the notification “Publisher” to the label as follows:

The assign(to:on:) operator subscribes to the notification publisher and links its lifetime to the lifetime of the label. Once the label gets released, its subscription gets released too.

The rules of a subscription

Now that you’ve seen a basic example of a Publisher and a subscriber in Combine, it’s time to go over the rules that come with a subscription:

That’s right; subscriptions can come with completion, but not always. Our Notification example is such a Publisher, which will never complete. You can receive zero, or more notifications, but it’s never really ending.

An example of a completing publisher is the URLSessionTask Publisher that completes a data response or a request error. The fact is that whenever an error is thrown on a stream, the subscription is dismissed even if the stream allows multiple values to pass through.

These rules are important to remember to understand the lifetime of a subscription.

Now that we know the basics we can jump into the @Published keyword. This keyword is a property wrapper and adds a Publisher to any property. A simple example can be a boolean which we assign to the enabled state of a UIButton:

To break this down:

The first thing you might notice is the dollar sign in front of isSubmitAllowed. It allows you to access the wrapped Publisher value. From that, you can access all the operators or, like we did in the example, subscribe to it. Note that you can only use this @Published property wrapper on a class instance.

Memory management is an important part of Combine. Subscribers need to retain a subscription for as long as it needs to receive and process values. However, once a subscription is no longer needed, it should release all references correctly.

RxSwift comes with a DisposeBag and Combine comes with a AnyCancellable. The AnyCancellable class calls cancel() on deinit and makes sure subscriptions terminate early. Without using this class correctly, you can end up with retain cycles. Taking the above example, we can add it as followed to make sure our submit button subscription is released correctly:

In some cases you might have multiple subscriptions to retain. In this case, you could use the store(in:) operator to save each subscriber to a collection of cancellables:

As soon as you start working with Combine, you’ll run into errors about mismatching error types. Every Publisher describes how they can fail and which error type can be expected as a result. Like we used the map operator in our notification example, you can use operators to recover or react to errors. Common operators you might want to try out:

Debugging functional reactive languages can be hard. It often results in long error descriptions and unreadable stack traces in Xcode. This is a reason for many developers not to use frameworks like RxSwift and ReactiveSwift. Looking at Combine, it seems that it isn’t a really different experience.

Fortunately, there are ways to debug in Combine with the use of the following operators:

Unfortunately, it’s hard to list all Publisher operators here and keep them up to date. The best way to find them is by diving into the documentation topics. However, to give you some idea, here’s a word web from WWDC: 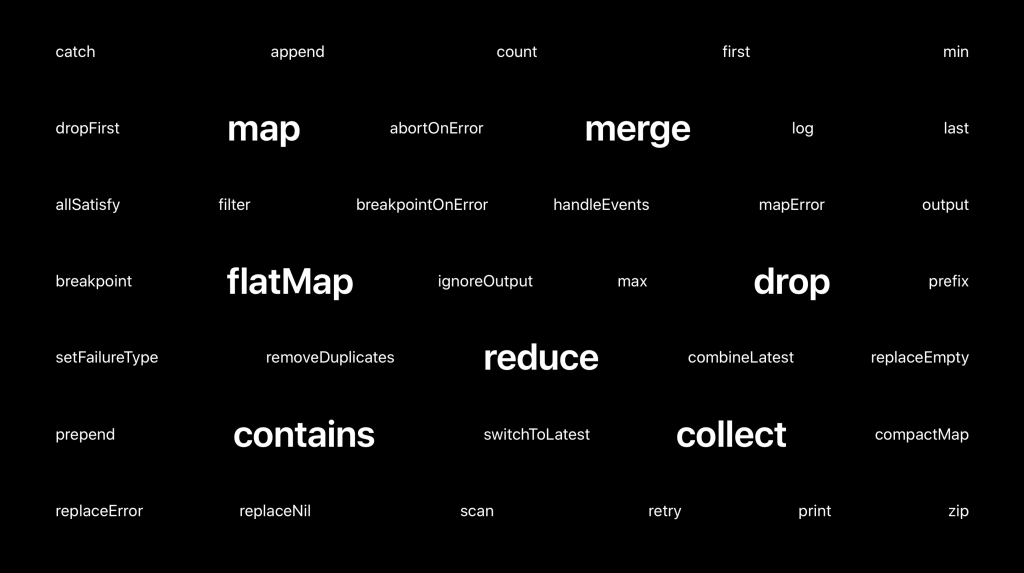 The Combine framework is perfectly suitable to work in combination with MVVM. In fact, it’s a lot better with Combine! I’m not going into too much depth, but the example from before can be converted into an MVVM example as followed:

You should be able to get yourself started with Combine. The basic principles are explained, and there’s a lot more to cover. Therefore, I encourage you to start exploring Combine yourself!

Also, the following WWDC sessions are a great start to give yourself some more background information:

To read more about Swift Combine, take a look at my other Combine blog posts: